The truth and narrative, 2: my life with Julio Cortázar

In the midst of my Greenean visions, fueled from the outset by Pulling’s trip from Buenos Aires to Asunción, I picked up a novel called The Winners at my local bookstore.  I was still in college, and I hadn’t met R in Mexico City yet.

I was possibly still reading One Hundred Years of Solitude or soon to do so. This would have been immediately after exams, either in December or May, when I went to the book store to find novels to fill my holidays away from studies and those other books that gave me purpose without vision.

The Winners had a thick grey paperback cover with a waxy finish.  The design appealed to me, and I can say honestly that book design is an art I admire and cherish and that does indeed achieve its purpose of inviting me to open the book.  It was published by Pantheon, an imprint I always looked for because their titles were leftist and internationalist, like an American Verso.  The novelist was Julio Cortázar, an Argentine writer who was new to me at the time.

It was a narrative of people thrown together by chance.  They’d all won a cruise trip in a local lottery, but once out to sea it became clear that something was wrong.  They were prohibited from going certain places on the boat. There seemed to be a disease somewhere, but there was little information on what was happening and how it might end.  They created alliances and enemies and friends, like Lord of the Flies but not really.  Perhaps more like an inverted episode of Doctor Who, the British inter-galactic time and space traveler who would alight in different worlds and plunge head-first into local controversies and disputes—only in the case of The Winners, it was like a Doctor Who-less Doctor Who with Lord of the Flies-like consequences.

The Winners reflected the real world I knew at the time, in which people become intimately concerned with each other when circumstances gave them common stakes in something.  The something could be anything and was often potentially dreadful, but I was an existentialist.  Cortázar wasn’t my first attempt at anti-narrative or pre-postmodernity.  I’d just come off reading Ulysses and Gravity’s Rainbow in the same term. The difference between Pynchon and Cortázar was that I chose Cortázar, and next I read Hopscotch (Rayuela).  The die was cast.

My copy of Hopscotch was from the same grey-covered series on Pantheon.  I was captivated by the photograph of the thin strawberry-blonde woman on the cover, blouse off her right shoulder, looking down or away, smoke from her cigarette trailing upwards, obscuring her face.  The book came with “instructions” for reading—in linear form, in the order of my choosing, or Cortázar’s indications at the end of each chapter pointing the reader through the book in a semi-random way.  I chose the last alternative, which however random-seeming hung together around a life-time of doing what R and I did in Mexico City for the summer of 1984.

A few years later, in 1987, Sérgio talked about Cortázar as we drank chopp in the sidewalk cafes on Avenida Atlântica in Rio de Janeiro.  Sérgio was the 40-something son of Dona Nazaré, a nice woman in her 60s who rented her rooms as something of a cottage bed-and-breakfast business on Rua Duviver in Copacabana, one block from one of the most famous beaches in the world.  Sérgio was writer; he stood at a podium every day typing while standing, in an odd bedroom or in Nazaré’s kitchen, adding more words and pages to his self-described Kafkaesque stories about life in mid-twentieth century Brazil.  He would publish them on his own, but he had no grand ideas about how many copies they would sell.  For money, he had a state pension (disability after being sacked from a state job and tortured by the military regime), his mother, and the sales of his uncle’s paintings, which he hawked on weekends Copacabana and Leblón.  In whatever combination, it was enough.

Sérgio himself had walked off the pages of Hopscotch.  I liked him, in spite of his off-putting arrogance, and I added many like him to my cast of friends and supporters around Rio.  As we sat there under the umbrellas on Avenida Atlântica, Sérgio named the working girls, many of whom were friends of his and more than few of which, he made of point of mentioning, were not girls in the genetic sense of the word in spite of all (quite convincing I should add) evidence to the contrary.  Avenida Atlântica was his world, and for a while it became mine.  With Sérgio, I read Cortázar and heard a calling.

The opening photo is of a volume that R gave me when I visited her in Mexico City in the summer of 1986, Nicaragua tan Violentamente Dulce.  In the background, Gary Fuss’s photo of Chapter 7 of Hopscotch sits at the opening of an earlier version of this post.  Gary was kind of enough to allow me to use his photo, which can be found on his Flickr page here, along with many other interesting photos of Chicago and elsewhere. 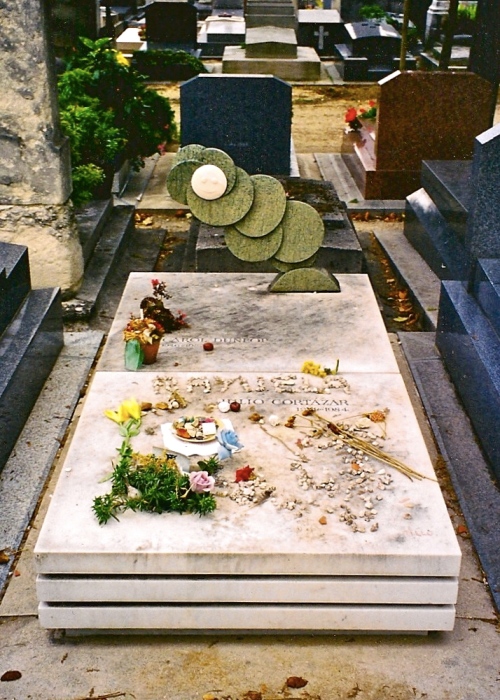 The photos of Copacabana Beach and Cortázar’s grave site were both taken by the author, in 1987 and 2002, respectively.  This was the view of Copacabana from across Avenida Atlântica, where Sérgio and I would sit, talking and drinking chopp in the sidewalk restaurants.

My volumes of The Winners and Hopscotch have been lost, sold to the Dawn Treader bookstore along with 40 shelf-feet of books that I liquidated when I left Ann Arbor in the early 1990s.  This sale involved nearly every single book I had ever owned in my 28 years up to that point.  It was a literary purging.  I saved some (like my Pynchon) and would have thought Cortázar’s among them, but no.  To this day I can no longer find The Winners or Hopscotch (Rayuela) among my holdings.  Along they went with the lot, over $400 of books at about 50 cents per book.  At that point in my life, it was half a month’s salary.

It was a lot of books for anyone, 28 or 82, but books were where I lived to that point, in my head and in the imaginations of my writers.  For a while, I entered Dawn Treader lore, and a photograph taken from one of my books went on the store’s bulletin board with other artifacts retrieved likewise over the years.  I know that the photo stayed there for some time, a few years it seems.  I remember the woman reviewing my books for purchase was struck by the notes my father wrote on the cover page of every single he’d ever given me.  Perhaps there are still books of mine on the shelves.

In Brazil in 1987, I was fortunate to have brought Kafka’s The Castle.  It kept me company after Sergio’s lectures.  At home in the mid-1980s, I had Doctor Who—the Tom Baker version who with the lovely Romana took me all the other places literature and social science couldn’t.