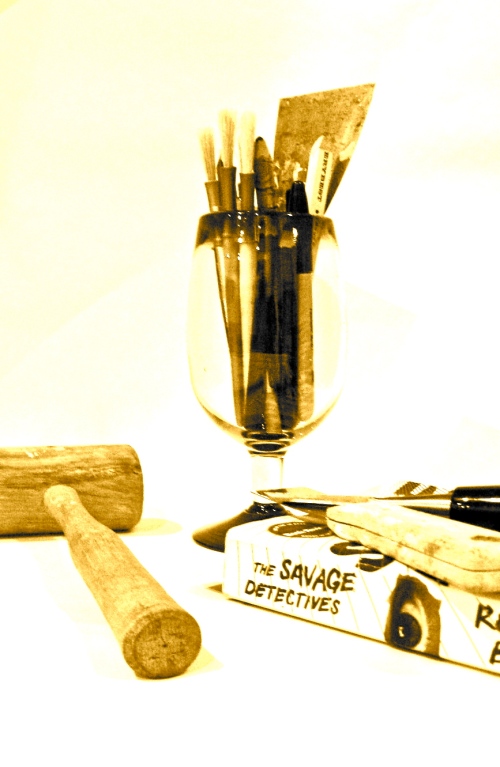 A friend of mine told me about a playwriting workshop he attended some years ago.  The instructor was David Mamet, and after the lecture someone asked Mamet what made him a great playwright.

“I write plays, and you don’t,” was the reply.  David Mamet, it seems, talks like one of his characters.

Write what you know

You can’t be a great artist of any kind—playwright, sculptor, painter, novelist, etc.—if you produce nothing at all.  That’s what separates Mamet from those who would like to be writers.  It does not, however, separate Mamet from all the other writers who in fact write, whatever anyone thinks of it.

Apart from writing well or competently, writers themselves have little control over many other factors that separate great writing from just plain writing.  For the fact is that great writing will never be recognized as such if it doesn’t have a context in which it flourishes and speaks to enough people to make an impact on the world.  Great writing itself isn’t a pure quality, forever-set and canonical.  What we think of as great writing is shaped as much by the times to which it corresponds as by any inherent qualities of the writing itself.  Write what you know, as they say; if you’re in the zeitgeist, the rest will take care of itself.

Paint what you are

Jackson Pollock dared to follow his muse, wherever it led, regardless of what it meant, and he let his technical abilities take him to places other painters couldn’t dream of.  In that particular moment—post-World War II United States—his paintings made people see art and, one might argue, the world, differently.  His was a singular genius, exercised and exorcised against a cultural backdrop that needed his art to understand itself. 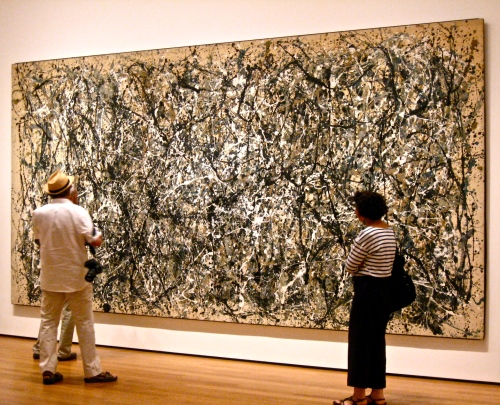 The Pollock room at the Museum of Modern Art, on the fourth floor, is a slide show of singular dedication and focus that seems to culminate in the famed Number 31, which spans an entire wall. From painting to painting, Pollock moves from semi-representational work to increasingly abstract renderings that burrow each time more deeply into his consciousness itself.

Amid the soft footfalls and hushed voices in the room, Allen Ginsberg howls and yells and scratches at the seams of that world, trying to break out.  There is my own father huddled in a French Quarter coffee shop with his Aunt Carol, herself a painter, telling her about his poems or talking about art, trying to find some safe, comfortable place to let an idea fly from the heart.  Every splatter and spray of paint on that vast canvas is a voice from a world suffocating in Sylvia Plath’s bell jar, tapping on the glass I am, I am, I am …

a woman in an abusive marriage, serving cocktails to some chain-smoking Mad Men caricature

a young man in Mound Bayou, Mississippi who just wants to vote

Watson and Crick walking into the Eagle Pub in Cambridge, England, on February 28, 1953, saying that they had found “the secret of life”

The voices blew through the tragedy of Pollock’s own life and the terror of his private demons, inseparable from the age he lived in because he made it so in his work.  As Pollock himself put it, “Every good painter paints what he is.” 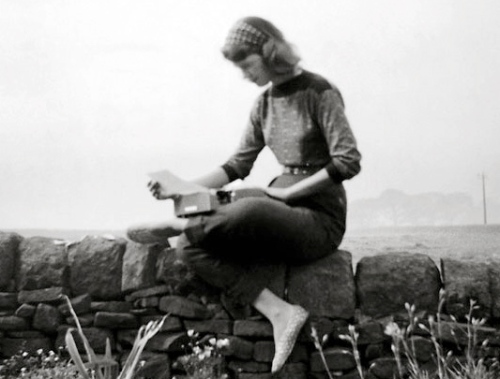 Sylvia Plath, writing atop a stone wall in England

Does context make the art?  It’s a chicken-and-egg question that cannot be answered.  It’s impossible for most audiences to enjoy Shakespeare without an interpretation, and an interpretation like Scotland PA is nothing short of wonderful and luminescent of both Shakespeare and modern American culture, as much for the Shakespeare and the Paul Rogers and Beethoven dominated soundtrack as for the send-up of drive-through fast food.

One without the other is a hollow experience—art or context.  Pollock helped us understand the times in which he lived, and the resounding verdict on the worth of his work is that with every passing year he continues to reflect and refract his times even more intensely.  It’s all there on the canvas:  the straight-laced, short-haired, hourglass-figured, white, clean, modern, scientific world of tomorrow epitomized in Robert Moses’s 1964 New York World’s Fair.  It’s all there, splattered, fractal, chaotic.

Art becomes art because it helps people to understand their world.  It remains art because it continues to do so, over and over again.  What makes art great is something that millions of people determine every day, in all their infinitely innumerable actions and words.  What makes great art great is not so much its inherent greatness as the fact that it survives at all.

“Idiot wind, blowing through the dust upon our shelves, we’re idiots, babe, it’s a wonder we can even feed ourselves.”

Photograph of the glass margarita chalice with paint brushes, pens, pencils, etc. against the backdrop of a living room wall by the author.

Photograph of Jackson Pollock, No. 31, at MoMA, taken by the author, July 25, 2010.  Find Pollock all over the web.  This is a great photograph inspired by Pollock.

Sylvia Plath on a stone wall, from Mortimer Rare Book Room by way of the Amherst Bulletin.

Scotland PA is a wonderful film.  See reviews here and here, and whatever they say I recommend it highly.