The truth and criticism: origami boulders (memo re: November 2)

Susan Sontag famously wrote, “Interpretation is the revenge of the intellect upon art.”  Those were fighting words in 1966, among a certain (probably not so large but then again much larger than it would be now) crowd.  “Even more,” she continued, “It is the revenge of the intellect upon the world. To interpret is to impoverish, to deplete the world – in order to set up a shadow world of meanings.”

True enough, but what is the case when art itself becomes the revenge of the intellect upon . . . art?

Thus Origami Boulders, an experiment in creative expressionism that emphasizes the bridges between satire, infrarealism, hyper-realism, post-modernism, modernism, and plain old-fashioned mockery.  It is not subtle.  In an age when hyperbole has become truth and irony just means “bad luck,” Origami Boulders promises a return to simpler truths.  What-you-see-is-what-you-get.

Fine enough, you might say, but where do you draw the line between “simpler truths” and fascism?  This is a good question, since much of what is considered fascism is founded upon simple truth.  At the same time however, it’s also true that only about ten percent of all simple truths are, in fact, fascistic.  The problem is that that ten percent can foreseeably find the backing of an incredibly disproportionate amount of a country’s wealth and power.  Here is the linkage between the artist, the slacker, the Tea Partier, and the hipster, “who in fact aligns himself both with the rebel subculture and with the dominant class, and thus opens up a poisonous conduit between the two.”

Dear heavens—but the Origami Boulders were meant, in fact, to smash the conveyors of convention, to drown the purveyors of propriety, and to derail the fornicators of formality.  How is it that such a bold experiment could so quickly become turned upon itself until it was nothing more than the opposite of what it intended?  Much less than a hollow statement of artistic meaning in an artless world, the Origami Boulders, it would appear to the untrained and unwashed, are little more than tools of their own opposition, indistinguishable in effect from the contemporary Democratic Party.  As the man on Ellis Island said to my great-great-grandmother (not that) many years ago, “Welcome to America.”

Pray this shall not be the case and that the stony weight of the Origami Boulders will come crashing down to Earth on November 2, 2010, raining like meteorites and asteroids on the dinosaurs, bringing to an end the rule of claw-toed, semi-feathered metareptiles and giving way to the rise of little birds and all the brilliance of avian plumage and delicacy.  Sigh.

America, it seems, has become the revenge of the anti-intellect on democracy.  Can we throw more than paper boulders in our defense?

Photographs of origami boulders and the artistic process by the author.  This work, like everything else in America, is for sale.  Please email guidry_z [at] hotmail.com for a price schedule and list of options to tailor Origami Boulders to your specific needs.  The fact that there is printing on one side of the sheet of paper used is indeed a meta-critique of Western Society itself, leaving no stone unturned in the artist’s quest for antihistorical self-actualization.  I am grateful to Rob Vanderlan, fellow political science graduate student at the University of Michigan, for introducing me to the joys of origami boulder sculpture in 1989.

For a fuller fleshing out of the meaning of irony, see the “urban dictionary” and not, under any circumstance, Alanis Morisettee.  For the “hipster” quotation, see Mark Greif’s article in the November 1, 2010 issue of New York magazine.

Susan Sontag’s famous quotation from Against Interpretation and Other Essays (1966).  I tend to agree with her, so much so that I once paraphrased her statement in a cover letter for an academic position, alleging that social science is the revenge of the intellect on people.  Needless to say (but I’ll say it anyway), I was never called back on that one.  Then again, I also think that Origami Boulders so deeply challenges the very fundamentals of both Eastern and Western artistic traditions that Camille Paglia should invite me to her house for cocktails, though that would be too close to my heart.  I’ll keep buying lottery tickets for the better odds.  In retrospect, it seems like Sontag’s statement is oddly prescient of Fox News.

E/F – the glass of knowledge

F.  “A little learning is a dang’rous thing;
Drink deep, or taste not the Pierian spring:
There shallow draughts intoxicate the brain,
And drinking largely sobers us again.”

For some, knowledge leads down the path to hubris, a “revenge of the intellect” as Susan Sontag warned (ironically, some might say) in “Against Interpretation” (1966).  For others, knowledge is the source of enlightenment.  Know thyself:  as inscribed on the Temple of Apollo at Delphi and lived by Socrates, for whom the knowledge of anything was only as good as its limits.

However we look upon knowledge or follow where it leads, it’s almost certain we’ll wind up somewhere never intended, with consequences for good or ill that we may barely understand.  Such is the way of truth.

The glass and St. Rita’s Church

The tumbler is half-filled with Apple and Eve apple juice, all natural, no added sugar, of unknown yet possible relation to the juice of the apples of the tree of the knowledge of good and evil.  At least that’s what I take away from the company’s name.

The etching on the glass is of St. Rita’s Church, Harahan, which was founded in 1950 by Monsignor Roy Champagne, who was a young priest at the time.  The tumbler was part of a larger set created in 2000 for the parish’s 50th anniversary.

I went to St. Rita’s school from the fourth through seventh grades, and Fr. Champagne (he wasn’t a Monsignor yet) was still walking the grounds with the children and saying mass on Sundays.  I attended church there until I left my parents’ home in 1986.  For many years, I performed with, and then led, the youth choir.  My son was baptized at St. Rita’s.  I now attend St. John’s Episcopal Church in Park Slope, Brooklyn, but St. Rita’s is a cherished part of my life.  It is a place I return to from time to time, to walk in the past and present, and to reflect on the lessons of knowledge and ignorance in my own life.

The desk and a dual journey from Michigan to Illinois

The desk was made in Michigan, by the Wolverine Manufacturing Company of Detroit.  The company was organized in 1887, according to the tag, and at least this one desk is still going strong.  Wolverine Manufacturing was one of the historical suppliers of parlor and other furniture in the Arts and Crafts style.  I wonder sometimes at the happenstance (some might say magic) by which I took a similar route from Michigan, where I obtained my doctorate in 1996 from the university in Ann Arbor, to Rock Island, where I began my first teaching appointment the same year.

Almost everything that has been posted in truth and rocket science was written at this desk. 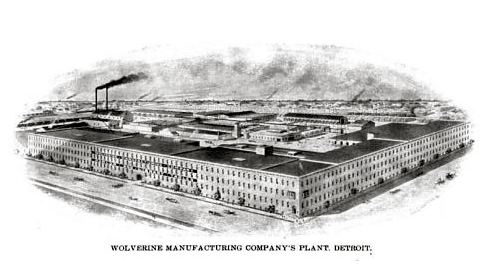 The photos of the tumbler and the desk were taken by the author.

This image of the Wolverine Manufacturing Plant was taken from the State of Michigan’s Twentieth Annual Report of the Bureau of Labor and Industrial Statistics (Lansing, 1903), as found on Google Books.