The truth and the bee tree 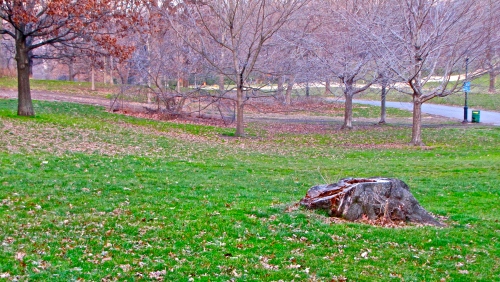 The bee tree is gone.

It was there, under that tree in April of 2008, that I saw a bee swarm come up in the park.  I’d never seen such a thing before, and it remains to this day a most magical experience.  I was laying on the ground with Duke, my dog, just enjoying a nice warm spring day.  My son, Noel, was playing ball with his friend not too far away.  The bees came up on me and Duke slowly, a few at a time, until they were arriving by the dozens and then hundreds.  They hovered over us but never landed.  The sound of thousands of bee wings in motion covered us, like a blanket, and I felt a warm serenity.  After a while I noticed the bees moving up toward the branches of the tree above us.  There, the bees were swarming around their queen, who was leading the colony away to find a new home.  They shared a part of their journey with us, and we were blessed.

A few weeks ago, in December of 2011, my son and I were walking through the park when we passed the spot where the bee tree was.  In its place, there was only a stump.  It must have been cut down recently, perhaps a result of Hurricane Irene, or maybe disease.  Between the Hurricane, last year’s tornado, and the unexpected Halloween snow storm in 2011, the park had a lot of downed trees to deal with – so much so that the park was giving away the mulch they made from this year’s Christmas trees.  Whatever the reason, the bee tree was no more.

With death comes reflection for those of use who are left behind.  That’s how I felt when we happened upon the stump.  In the time since the bee swarm in 2008, a lot has happened.  About a year later, Duke died, which I chronicled in “The truth and sleeping dogs” on this blog.  We buried some of his ashes in the park, where he had spent so many happy days.  Noel is now in the fourth grade and is a whole lot more of a person than he was then.  His wants and desires are more solid.  His life in the park has grown, too, from birthday parties and piñatas, to baseball and sledding and flag football.  Back in 2006, when he was 4, he saw a racoon on the little hill by the Third Street Playground.  For a year or two, every time we passed that hill he would slow down and hunch up, stopping to say, “Daddy, be quiet, we’re hunting for raccoons!”  He doesn’t say that any more, but he still thinks about it and we were talking about that raccoon just last week.

In that time, I lost a job and spent a little over year doing odd consulting gigs while trying to see if I could reorient my career.  It was a pretty bad crash, but I came out of the better in the end.  The year of searching was a gift, in which for the first time in my life I stopped and simply enjoyed myself.  I started Truth and Rocket Science at this time, in February of 2009 about four months after I stopped working. That summer, I wrote a post called “The truth and Twitter, part 3:  The Swarm,” reflecting on the “swarm culture” that Twitter is producing.  In the post, I brought up the bee tree and added a photograph of it.  That photo gets a lot of hits – if you Google “bee tree” or “bee bee tree,” this photograph is on the first page of images that comes up.  In February 2010, I took a limited contract with an agency providing services to people with HIV and those who are at risk of HIV.  By Christmas the funds were running out and I was about to be laid off when the department director walked off the job and a new career was born.

In the wake of my mother’s death, my father and I have created a new relationship, two men supporting each other against life’s adversities.  I met a wonderful woman who has helped open up my heart in ways I haven’t been used to.  I got up to 7 miles a day running and then herniated a disk in my lower back, which has put me off running for the last 18 months.  With everything else, it left me feeling older and older, approaching 48 now and wondering what it would mean to start thinking of myself as middle-aged.  I spend a lot of time reflecting on my youth and what I’ve done in those other 2 or 3 lives I have led in Ann Arbor, Brazil, South Africa, Rock Island, and the Mississippi Delta, to name a few of my great haunts.  I can go on YouTube and watch videos from the 80s and 90s for hours, remembering all the songs that form the soundtrack of my life. 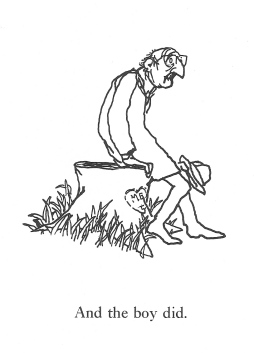 At this point, the episode under the bee tree seems like a lifetime away.  In the next few years, as I have over the last few, I will pass the bee tree’s place again and again.  It won’t be with Duke, and less and less with Noel as he grows into his own life and starts to spend time in the park without me.  Today I did 2 laps around the park on my bike, smiling as I passed the bee tree stump in the darkening eve.  In the next couple of months I will start running again, and there it will be, a reminder of so many things in life and, at the bottom of it, the day when Duke and Noel and I saw the bees migrating to their new home.

It all brings me back to another place, when I first read Shel Silverstein’s The Giving Tree in the fourth or fifth grade, in religion class at Catholic school.  A good 35 or 36 years later, my brother gave me his son’s copy of the book to pass on to my son.  The first time I read it to him, I had to choke back tears.  Something profound came over me, like it does sometimes when I’m doing things with my son.  I suddenly see myself in him, or my father in myself.  Time stands still and life takes on new meanings, like light refracted through a prism emerging in many colors on the other side.

I’m not ready to sit on that bee tree’s stump just yet.  I have a few more things to do, but one day I will go to Prospect Park and take a seat there.  I’ll be an old man, and my own son will be grown and maybe with children of his own.  I’ll sit there, and I’ll remember to thank the bee tree for the times we have shared. 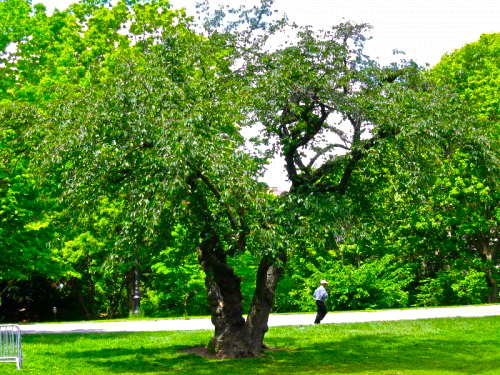 Photographs taken by the author.  The image from The Giving Tree was scanned from my own copy, which was published by Haprer Collins in 1964, the year I was born.  In that frame, the boy sits on the stump.  It’s the last thing the tree could give him, “and the tree was happy.”