The truth and Brasília, 3: Faroeste Caboclo 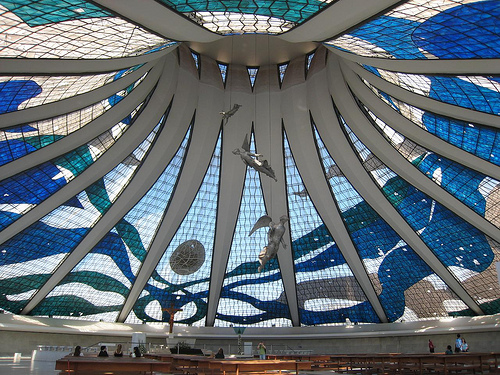 Brazil is a country of inspired appropriation.  Its peoples, cultures, sounds, and visions grind against each other.  They rise up and smash together like tectonic plates.  In the collision of Brazil and Brasília, the city of candangos gave the country Renato Russo.

No “torso of steel,” no “[w]inged elbows and eyeholes,” but like Zweig and Plath a literary mind and poet, Russo’s voice became his generation’s.  In his epic song, “Faroeste Caboclo,” Russo tells the story of a poor kid’s migration to Brasília across 159 lines of free verse, punk sensibilities, and an affecting melody that calls to mind the traditional country music of Brazil’s Northeast.  Faroeste is what they call a “Western movie” in Brazil, and caboclo refers to the Brazilian mestiço everyman, a mixture of races and cultures, poor, seeking his or her fortune in some faraway place.  Faroeste Caboclo is Walt Whitman, rogue-Gary Cooper and Joe Strummer together in Niemeyer’s white palace.

The hero is João de Santo Cristo, from Brazil’s Northeastern “backlands.”  Brazilians call this region the Sertão, a rural, agrarian, drought-afflicted area that is the poorest place in the country and carries the deepest currents of Brazil’s premodern past.  João robs the poor box from the church.  He goes after the girls in the town.  People don’t trust him.  He feels the effect his skin color has on others who are lighter, more well-to-do.  He’s arrested and goes to reform school, where he is raped and degraded.  He is filled with hatred.

When a man on his way to Brasília decides not to go and gives his bus ticket to João, he becomes an accidental candango, leaving his past for the “beautiful city” where everything will be different.  He works as a carpenter’s apprentice, but he can’t make ends meet and becomes a drug trafficker.

After some time in the criminal world, he tries to go straight when he falls in love Maria Lúcia, but eventually the drug trade pulls him back in.  João’s enemy, Jeremias, steals Maria Lúcia and they have a child together.  João challenges Jeremias to a duel, which is covered in the press and shocks the city’s elite but makes João a hero to the people.  In the duel, Jeremias shoots João in the back and wounds him fatally.  Maria Lúcia rushes to her first love and gives João a gun.  He challeges Jeremias to die like a man and shoots him.  In the end, Maria Lúcia and João die together in each other’s arms.

Russo and his bandmates in Legião Urbana (Urban Legion) grew up in Brasília in the late 1970s.  Their songs of protest, love, and everyday struggles became the nation’s soundtrack to the last years of the military dictatorship and the re-emergence democracy in the 1980s.

“Será,” a love song with an anthemic refrain, could be heard blaring from sound trucks at the massive marches and rallies of the caras-pintadas (“painted faces”) in 1992, as they challenged the nation to bring down Fernando Collor, Brazil’s first democratically elected president since 1960.

So called because they painted their faces in the Brazilian national colors, green and yellow, the caras-pintadas had grown up under the military regime and saw their hopes threatened by Collor’s massively corrupt regime.  They led the way for the whole country, which stopped each day at 7:00 for the allegorical soap opera, Deus Nos Acuda (God Help Us), a comedy in which the angel Celestina tries to save Brasil from the excesses of its social and political elite.  In the show’s opening, the rich are smothered in mud and flushed down a whirlpool shaped like the country itself.

Collor was impeached and left office by the end of 1992.

Russo died on October 11, 1996, of AIDS-related illnesses.  Russo’s wishes were to have his ashes spread over the gardens of Brazilian landscape artist Roberto Burle Marx, returning him to Brasília and its modernist vision.

Photo:  interior of the Brasília Metropolitan Cathedral.  As with the previous post, the photo is taken from the Flickr site of Shelley Bernstein, aur2899.  She works at the Brooklyn Museum (according to the Flickr “about”) and has a lot of pictures from Brasília and elsewhere.  Her Brooklyn Museum blog posts are here.

Renato Russo was born Renato Manfredi, Jr., in Rio de Janeiro.  He moved to Brasília in 1973 at the age of 13 and became a songwriter and musician.  He renamed himself after the philosophers Rousseau and Bertrand Russell, and the painter Henri Rousseau.

Faroeste Caboclo plays on the iconic stories of migration from the Brazilian backlands, the sertão, to cities in search of a better life – one of the central storylines of Brazilian history.  It’s a story of spiritual depth and apocalyptic reach, most famously told in Euclides da Cunha’s Os Sertões.  Da Cunha’s book, published in 1903, tells of the Brazilian military’s destruction of the city of Canudos in the 1890s.

Canudos was a city that grew up around the milennial teachings of a folk preacher, Antonio Conselheiro, bringing tens of thousands of poor Brazilians together in a sertanejo enclave to await the last days.  The Brazilian government saw the city as a grave threat to its own project of bringing Brazil into the community of modern republics while still maintaining the class and racial divisions of its colonial and plantation (slavery) past.  Canudos was utterly destroyed by the military, and its inhabitants were massacred.

The destruction of Canudos removed one “sore” from the Brazilian body politic, but in the predictable irony of history and unintended consequences, Canudos gave birth to the next social threat.  Soldiers from the campaign, unable to find work on retrn to civilian life, migrated south from the Northeast to Rio de Janeiro and built their own squatter colony on a hill.  Thus was born the first favela, later to become the 21st century dystopian Canudos that continues to challenges the Brazilian modernizing project.

During 1992 and 1993, I lived in Belém and accompanied the protest marches through the city.  I was officially a researcher, but I was also 28 years old, not much older than the caras-pintadas who I spoke to.  Just a few years earlier, as a college student in New Orleans in the mid-1980s, I used to grab the New York Times every day to read up on the military’s exit from power in 1985.  In 1992-93, like everyone else in Brazil, I was glued to the television every day for Deus Nos Acuda.

Another song that rang out from the sound trucks and radios everywhere was the first Legião Urbana hit, “Tempo Perdido,” with the echoing call of the refrain, selvagem, meaning wild, untamed. It was a song about love and not losing the time at hand, but it was also about the passion for breaking free of repression that made this song the “anthem of an entire generation” (O hino de toda uma geração), according to Alexandre Inagaki.  In the video the band pays homage to all their forebears in rock and roll.

“Tempo Perdido” follows in the footsteps, or looking down from the shoulders of Raul Seixas and “Maluco Beleza.”  Raul Seixas was Brazil’s Elvis (his idol), Jim Morrison, and John Lennon rolled into one.  He “was not just a musician, but a philosopher of life …” (Raul não era apenas música, Raul era uma filosofia de vida), “Always Ahead of his Time.”  See Jesse’s portrait of Raul on her blog, Mundo de Jesse.   “Maluco Beleza” (“Crazy Beauty”) is for many the epic statement of individuality and creativity from the central icon of Brazilian rock.

Senhor Hype reports that the Brazilian RockWalk is in development, creating a walk of fame that will include both national artists as well as some international artists like the Scorpions.

For an English translation of “Faroeste Caboclo” along with the music, go here.  The translation of the ending of the song above is taken from this video, and credit goes to Alexandre Mello and Andrea Hilland.