Another year and we remember, 2010 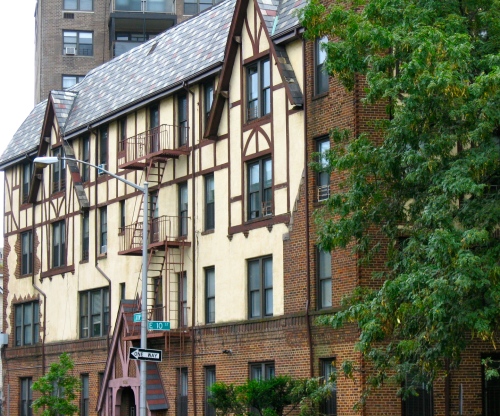 For three years, from 2007 to 2009, I was able to look out of my living room window every September 11 and see the Tribute in Light over downtown New York.  Last year, I posted photos by my neighbor and myself.  Then, on 9.27.09, I moved to this apartment.  I can’t see downtown from there, though I can see the lights shooting up over the trees of Prospect Park, like strange sentinels of an Oz far away, beyond the woods.  I know there were events—call them vigils, rallies, protests, or demonstrations—down at Ground Zero, but I wasn’t there.  I was working all day at home, cataloging AIDS service organizations in the tri-state area for a research project.

This year, the arrival of 9.11 coincided with Rosh Hashanah, the Jewish New Year, and the end of Ramadan, the annual fast that is one of the five pillars of Islam.  On Friday, 9.10, my son had the day off from school because of the Jewish holidays, and his friend G came over to visit.  We played ball in the park and walked around the neighborhood to grab pizza at Bene’s and snacks at the grocery.

The Bangladeshis were all out on the street, families.  The men wear white pants and tunics, with their small white caps that are often embroidered and appear delicate and firm and strong all at the same time.  You see groups of men like this on the sidewalks of Coney Island Avenue on Friday evenings after mosque services.  The women wear beautiful long patterned dresses and veils of vivid colors. 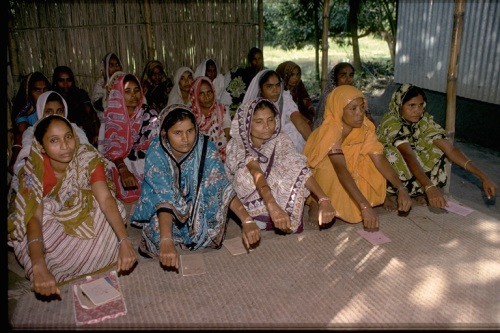 During Rosh Hashanah every year, Hasidic Jews—mainly the men, I think—come out on the streets of Park Slope and all around Prospect Park and try to reach other Jews to celebrate their heritage.  Dressed in black suits with white shirts and black hats, they are polite and discreet as they ask everyone passing by a simple question, “Excuse me, are you Jewish?”

Friday, as I walked my son over to his mom’s house after G left, we passed several along the park’s sidewalks.  They asked, and I think said, “No, not today” out of my habit with the usual assortment of canvassers for progressive causes who work the sidewalks of Park Slope.  But I might have said, “No, sorry” (why “sorry” I don’t really know).  My son asked why they were asking us, since we aren’t Jewish, and I explained what they were up to.   In a couple days, on 9.12, we would be going up to St. John’s Episcopal Church in Park Slope to celebrate mass with its mixed WASP and Caribbean congregation that we have come to cherish.

Thus it was that on, 9.11.2010, as my son and I walked home from the grocery on MacDonald Avenue through this jigsaw puzzle of religions, races, languages, ethnicities, foods and their smells, I thought about my old apartment and the sight I would not be able to see from my living room window.  I do not miss my old living room window.  I prefer the street the way it was today.  If there is anything that America has meant to me, it is this jigsaw that is not puzzling at all. 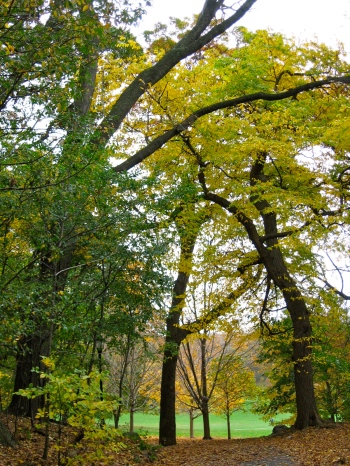 In a few weeks, the park will turn colors, and my walks over to pick up and deliver my son at his mom’s house will look like this.  Olmsted and Vaux, known more designing Central Park than Prospect Park, considered the latter to be their masterpiece, a place of recreation designed as a “democratic space” that breathed the essence of Whitman’s poetry in the war-torn republic.  And so it is.

I have my own opinions on the controversies brewing here in New York and around the country, along with my own doubts and fears about the future of the world, but that’s not what this posting is about.  Taking a break from all that, it’s just an observation about my neighborhood and the relatively tranquil days we’ve had here this week, in spite of it all.  Nothing more and nothing less.

Photographs of my apartment and the fall in Prospect Park taken by the author.  For a tour of the park and our neighborhood across the seasons, see The truth and every purpose and The truth and spring-time.

Photograph of the Bangladeshi women, all clients of the Grameen Bank, by a UN staffer and posted on this site.

I regret that I have no photo of the Tribute in Light over Prospect Park.  It’s moving in an entirely different way that the traditional photos of the lights over downtown are.  The park just looks like a forest, especially at night.   You really can’t see the city at all, especially if you can limit your view to the park itself.  At night, it’s like this but moreso.  The lights shoot up over the dark silhouette of treetops.  They seem to come from nowhere to announce a mystery looming in the distance.  Beacons, sentinels, signs of something distant and different.

This year, the lights had to be turned off a few times, because they attracted migrating birds, as Gizmodo reported:

According to John Rowden, citizen science director at the Audubon Society’s New York chapter, “it has only happened once before. It’s a confluence of circumstances that come together to cause this. Some of it has to do with meteorological conditions, and some with the phase of the moon.”

The images of the lights with the birds are some of the most beautiful photos I ever seen, reminding me of a stunning night in 1994 when I was walking along a road in Pretoria, South Africa, next to a ball park at dusk.  There was no game in the park, but the lights were on and hundreds of bats were flitting about them, feasting I suppose on the bugs in the lights.  Such was one theory of the birds in the Tribute in Light.  According to commenter deciBels, “If you’ve ever worked night construction, you’ve seen this all the time. Those big bright lights bring out big dumb bugs. What are 2 creatures that LOVE eating bugs? Birds and bats.”  See the incredible photos on the post, including this one from commenter, Baroness.

Our apartment building and this end of Prospect Park sit at the juncture of several neighborhoods.  Sweeping around the clock, starting at 11 o’clock in Windsor Terrace, the neighborhood is something like this, based on less-than-scientific observations I have made around the area since moving here:

11 o’clock—Italians, Irish, and Latinos/Puerto Ricans in Windsor Terrace, along with some (mainly white) yuppies (my tribe) who want to be close to Park Slope—9 o’clock—Jews of all sorts, trending more traditional (Orthodox) as you move to 6 o’clock and Borough Park and Midwood, along with Russians, Poles, Albanians and Bulgarians (European Muslims), and as you get over to MacDonald Avenue, Bangladeshis—6 o’clock—Banglatown all the way down MacDonald Avenue and Coney Island Avenue, Arabic and Bengali (I think) on all the signs until you get to Borough Park and the Orthodox Jews—5 o’clock—giant Victorian houses in the late-19th century suburban experiment called Prospect Park South, a bit mixed but very much the province of nice white liberals and yuppies on the move from Park Slope to bigger houses and easier parking—4 o’clock—as you head down Flatbush Avenue it’s a mix of Black Caribbeans and African Americans—3 o’clock—Jamaicans and other West Indians—and finally, all around the clock, Mexicans—Sunset Park (just west of Kensington) has a large and growing Mexican population, but the presence of Mexican taco stands, restaurants, cantinas, and bodegas all around my neighborhood is marked, though you don’t see the Mexicans on the street walking around the same way you do the Bangladeshis and others.

Neylan McBaine is a Mormon woman who lives in Park Slope and wrote a wonderful article about the Hasidic Jews on the sidewalks of the neighborhood this time of year.  See it here.  Finally, while writing this posting, on 9.11, I remembered to send my brother an email, Happy Birthday, bro.  Talk to you tomorrow. 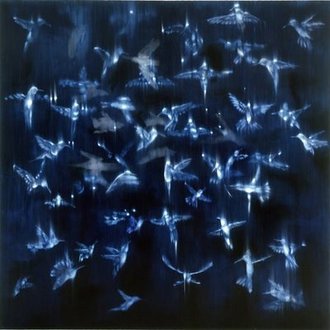