The truth and Mr. McNamara

things that get destroyed in war, Ann Arbor, January-February 1991

“Every quantitative measurement we have shows we’re winning this war …” Robert S. McNamara, 1962

Few people with the power to make change have placed so much faith in science as a force for public good.  Few have wreaked so much havoc and destroyed so many lives with their belief in science.  Many fewer still are those who have tried to grapple publicly with the damage they did.

These were thoughts that occurred to me as I read the obituaries of Robert S. McNamara yesterday morning.  It brought me back to Errol Morris’s The Fog of War, which I recently spent three days watching, over and over, for a different project.

In Morris’s film, McNamara narrates his life around 11 “principles” that he learned from his involvement with war, both the Second World War and Vietnam.  The first is “empathize with your enemy,” and this is the vantage from which I prefer to think about McNamara himself.  Rhetorically speaking, this makes him my enemy, which I know he is not, but like any enemy he is the object of my perplexed and sometimes angry thoughts, a person I likely would have “opposed” had I been of an age to do so.

To the extent that McNamara is an object of anyone’s judgment, however, empathy is the perhaps the best way one might understand how a person as remarkable as McNamara could also be, as David Halberstam put it, “a fool.”  Yet to remember McNamara only in anger or glib, anti-intellectual sniping at the fact that brilliance is no guarantee against foolishness gains nothing for the world.  Most brilliant fools will never, in the manner of Mr. McNamara, admit and more importantly explore their mistakes for the good of the public.

McNamara’s reckoning with his own illusions of scientific truth led him to conclude, among other things, that “rationality will not save us,” that “belief and seeing are often both wrong,” and that one should “be prepared to reexamine your reasoning.”  These are his lessons from war, but they would serve us well in ordinary life, too.

From the mid-1990s forward, McNamara became immersed in debating the issues around nuclear war, as well as Vietnam, and the documentary he made with Errol Morris was released right about the time the Bush administration began the invasion of Iraq in 2003.  McNamara’s ultimate conclusion from a life of war and science was this:

“What ‘the fog of war’ means is: war is so complex it’s beyond the ability of the human mind to comprehend all the variables. Our judgment, our understanding, are not adequate. And we kill people unnecessarily.”

In his dreams and goals and desires, in his patriotism and sense of duty, McNamara was no different than most people.  His own peculiar acumen, however, put him in an extraordinary position to affect the lives of others.  The hubris of his belief in science was perhaps no more or less than Richard Dawkins’s own arrogance, but circumstance and ambition have placed Dawkins in a relatively benign position that mainly involves preaching to his own choir of fellow travelers.

We might serve Mr. McNamara, and ourselves, best – whether from the view that he was an inhuman monster or the more reflective position that he seemed to wish we would have – by listening to the things he had to say during the last 15 years of his life, from the time of his autobiography, In Retrospect (1995), forward.

Late or not – 27 years elapsed between the end of McNamara’s tenure as Secretary of Defense and his autobiography – McNamara at least tried to help the world understand what he did, without making excuses for himself or (for the most part) fudging the facts in a self-serving way.

One could only wish that other powerful true believers would do the same, but the likelihood is that Alan Greenspan, George W. Bush, Dick Cheney, and Donald Rumsfeld won’t go where Mr. McNamara finally chose to go.

I was not yet born when Robert McNamara assumed the post of Secretary of Defense.  My first memories of television, however, are of war reporting.  I recall a picture of an empty field, with the rat-a-tatt-tatt of machine guns firing in the distance and the gravelly voice of a war correspondent trying to explain what we weren’t seeing.

The first time I went to Washington DC was in 1990 or 1991, quite possibly for the Washington Mall protest against the Persian Gulf War, part 1 (Desert Storm), though I don’t recall.  There was a wedding I went to around that time, which might have been the first trip to DC.

What I do remember is this:  As we drove from Michigan to Washington, we listened to the 10,000 Maniacs album Blind Man’s Zoo.  “The Long Parade,” a song about watching people pass along the Vietnam Memorial, stuck in my head.  By the time I reached the end of my own walk along the wall, I was in tears, as much for the tragedy spelled out in the 50,000+ names on the wall as for the one name I knew was not there.

My own father served in the US Army from 1962 to 1967.  He wasn’t sent to Vietnam, though he trained soldiers who went there from the place of my birth, Fort Hood, Texas.  Later, he was sent to West Germany where, for a couple of years, he stood with the first line of defense in the event of Soviet invasion.

These are the obituaries I read in preparation for this posting:  Thomas Lippman in the Washington Post, Tim Weiner in the New York Times, and Fred Kaplan in Slate.com.

The photograph at the head of this post is of a wall that I helped to build in Ann Arbor at the beginning of Operation Desert Storm, the First Persian Gulf War, in 1991.  The idea for this piece of public art was Jeffrey Levy-Hinte’s.  At the time, Jeff and I were both graduate students in political science at the University of Michigan, Ann Arbor.  A group of us built the wall and attached to it all of the things that get destroyed in war.  It was located on the central lawn of the Ann Arbor campus, the “Diag” as we called it, for the the diagonal pathways that cross the lawn to connect the buildings. 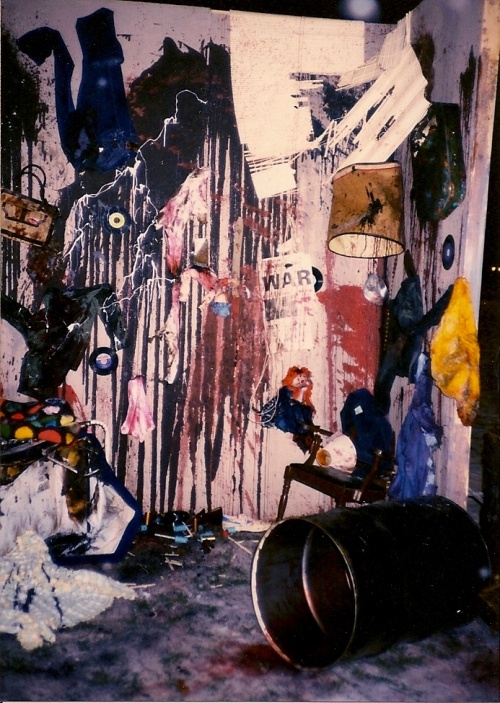 things that get destoyed in war, close up

The wall stayed up for only a few days, being torn down by ROTC members on the one night that people didn’t camp out there to protect it – at the time, it was terrifically cold, in the single digits every night.

The university, however, didn’t clean it up, and it remained for another few weeks.  As a pile of rubble it actually accomplished its goal even more effectively.  During this time, no one crossed the Diag without stopping to talk about the war.

Richard Dawkins is among the best and brightest evolutionary scientists of his generation.  I’ve read some of his books and have enjoyed them – The Selfish Gene, The Ancestor’s Tale – but I have found his unoriginal assessments of religion and the stupidity of people who choose to believe in God (even if they also believe in evolution) to be, at the most generous, tiresome.  For an example of hollow, rude intellectual badgering, see his video on Google.  It’s like a supernerd bully picking on crippled jock bullies and, frankly, I found the original much more entertaining.

The truth and unicorns, part 1 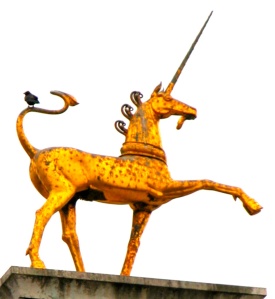 Unicorns are mythical creatures, but many people believe in them.  They don’t necessarily believe in the immanent possibility of seeing a unicorn on the street or in the woods any time soon.  They believe in believing in unicorns.

Myth speaks truth to reality, and the truth is that we need unicorns.  In the dialogue between myth and reality, we see the supposedly real world for what it really is:  impermanent, ever changing, mutable, a place that doesn’t have to be what it seems.  A place that isn’t really all that real, if by real you mean solid, concrete, tangible, or certain.

Without myth, the present is all we have (hello, Leonard Shelby).  Myth helps us to understand the world of now by freeing our dreams of worlds that might be, quite apart from whether or not they ever really happen.  Myth allows us the reveries of worlds lost, races won, loves cherished, sufferings endured.  Myth makes livable the stresses and oppressions of the moment.  Myth binds the present to the possible – the past that was, the past that could have been, the futures that may and may not come to pass, and the imaginary worlds that, without ever existing, will feed our passions and determine which future of the real world will, in fact, come to pass.

Myth is to our mundane world what relativity and quantum mechanics are to the world of Newtonian physics.  Newton’s laws work very well to explain the world of human-level sensory experience.  There’s a reason why an apple hits you on the head, and why every hanging apple on earth will do the same if you put a person under it at the right moment.  Newton explained the stuff we all see and helped us understand what was happening.  His laws extended our vision beyond the moment, predicting futures and explaining pasts.

Then came Einstein, whose Newtonian gaze extended much further than Newton could have dreamt, and in turn demanded a new reckoning.  With the theory of relativity, Einstein pushed our sight into the world of massive bodies – stars and galaxies – and the astronomical distances between them.  At the same time, Einstein’s discoveries also helped others (Max Plank, Neils Bohr, Erwin Schrödinger, and more) to gaze into the world of the infinitesimally small, smaller than the atom itself, and quantum mechanics was born.

The Unicorn in Captivity

At either end of the spectrum – the massive or the tiny – Newton’s laws don’t make sense, even though they explain the world in between quite well.  In relativity, things that happen now might occur before something that happened already, depending on where you’re looking from.  At the quantum level of subatomic particles like electrons and quarks, things can be in two places at the same time.  To believe in the physics of the massive, or of the tiny, is to suspend belief in the world we can see and touch.  And we can deal with that, because our minds constantly ask for more than what’s just beyond our noses.

This is why we have relativity, the 10 or 11 dimensions of string theory, the superposition of quantum particles, positrons and anti-matter, quarks, and unicorns.

Afternote: For a real treat on the marriage of design, art, and Isaac Newton, go to The Newton Project at the Dutch Art Institute.  Click on the artists’ names and see their designs.  My favorite is the one by Meiyu Tao.

Leonard Shelby:  See the post, “The truth and tattoos” and Memento.

The Unicorn in Captivity, from “The Hunt Tapestries,” Metropolitan Museum of Art, The Cloisters.  Image from:  http://www.geocities.com/area51/corridor/5177/hunt.html.