The truth and Legos (Good Things Come in Small Pieces)

You can make anything with Legos.   They are a digitized dream machine spawning infinite variety from a small set of mainly similar little pieces.  These plastic bricks stoke the imagination and allow minds—young and old alike—to turn ideas into things. Playing with Legos, one has a sense of creative power that is rare in my experience.  Hours and even days can pass just building, building, building—then tearing down and building again.

I don’t remember when I got my first set of Legos.  Nor do I recall when I stopped playing with them.  What I do remember is that Legos were always part of my childhood and then quite absent from my young adulthood.  That’s how it was for a long, long time, until I had my own child and, around the time he was two or three, I started playing with Legos again.

I noticed that Legos had changed a little in the thirty-or-so years since I’d last played with them.  The basic Lego blocks in all their bright colors were still the main pieces, 1x1s, 1x2s, 2x2s, 2x3s, 2x4s, 2x8s, 2x10s, in regular height and the one-third flats.  But they were packaged differently.  Now there were commercial tie-ins to Star Wars, Spongebob, Harry Potter, and Pirates of the Caribbean, as well as special theme sets of cities, oceans, or ancient Egypt.  Specialty pieces proliferated—hinges, odd shapes, and other pieces that gave Lego creations operational abilities (like flapping wings) and a verisimilitude that mainly existed in our minds when I was young. 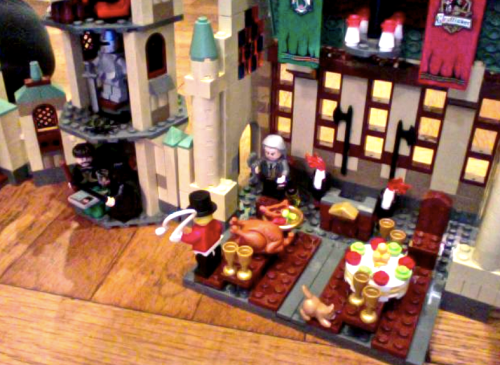 Now, at 47 years of age, I look forward to each birthday (my son’s, that is) and Christmas for the Legos we’ll (I mean he’ll) get.  On quiet evenings when we can make the time, he asks me to “play Legos” with him, and we sit there in the living or in his room just making up new stuff.  We always make the items in the packages first, but these are torn apart immediately to build more interesting things and rarely do we redo them a second time (though we have all the directions in a folder, just in case we’d want to).

My favorite objects to build are houses—Legos are about dreaming and we all have different ways of dealing with the New York housing market.  My son embraces greater variety—everything from dinosaurs to kitties, houses, spaceships, cars, and even cities.  If I get busy, I’ll return to his room hours (or a day) later and find an entire theme park.  He’ll explain me the rules and characters, and these will remain for days or weeks.

Perhaps the best thing about Legos, however, is the moment when I tuck him in to bed after we’ve created a jumble of buildings and other things and he says to me, “Daddy, it was fun playing Legos with you.”  One day he’ll grow out of these Legos, but I’ll pack them away and keep them for my next turn at Legos in another twenty years.