The truth and unicorns, part 2

The Maiden Captures the Unicorn

The Cloisters is the Medieval branch of the Metropolitan Museum of Art in New York City.  If you’re not in New York, drag your mouse here.  When you get there, you will find a large room, like the banquet hall of a castle, complete with a large, carved stone fireplace.  There is no table in the middle, and you will see hanging from the walls seven tapestries that date from the turn of sixteenth century (1495-1505).

They were woven in Brussels of wool, silk, silver, and gilt wefts by deft hands. Hanging twelve feet from ceiling-to-floor, the tapestries tell the story of a unicorn hunt, a standard Medieval myth, set against mille-fleurs backgrounds that show over one hundred species of plants. A group of well-armed nobles and knights search the countryside for a unicorn, but they can capture it only with the help of a Maiden, a virgin. They stab and gore the unicorn and set their dogs on it. Custom would have the capture killed on the spot – but the unicorn lives again in the final tapestry, The Unicorn in Captivity, which shows it tied to a pomegranate tree, surrounded by a low fence.  It is an allegory of the passion of Christ, or the cruelty of mankind, the rape of nature, the fierceness of men, the innocence of virgins, sexuality itself.

If you have the chance to visit the exhibit, read aloud Rainer Maria Rilke’s sonnet to the unicorn.  The echo in the room takes you out of time and space and into the sensual experience of near-fantasy.

O this is the beast who does not exist.
They didn’t know that, and in any case
– with its stance, its arched neck and easy grace,
the light of its limpid gaze – they could not resist

but loved it though, indeed, it was not. Yet since
they always gave it room, the pure beast persisted.
And in that loving space, clear and unfenced,
reared its head freely and hardly needed

to exist. They fed it not with grain nor chaff
but fortified and nourished it solely with
the notion that it might yet come to pass,

so that, at length, it grew a single shaft
upon its brow and to a virgin came
and dwelled in her and in her silvered glass.

Or see the following video (best when set to full screen, though the quality of photos suffers a little):

Rilke follows the Medieval European unicorn myth as it lived in the space between paganism and Gothic Christianity. The unicorn was brought into being by human desire, yet represented innocence. For this reason, it could be captured only by a Maiden, and not by men, as the tapestries illustrate so beautifully. Eros and Thanatos are deeply entwined in this story.

The contradictory portrayal of sexual desire and the crushing forces of denial are all on display:  Does the unicorn’s story celebrate the feminine or banish it to a world of fantasy and lost innocence that only serve the interests of men? How far do we have to go from the Maiden and the unicorn to witches and witch-hunts?  Is this story a well-dressed window of oppression, the Maidens who become women chained to the pomegranate tree and fenced in like the unicorn of the seventh tapestry? Is the unicorn Jesus, loved by women and destroyed by the cruelty and hubris of men? Does it show the men for the hypocrites they are, able for all their weaponry and warmongering to capture the unicorn only with the aid of the Maiden?

It makes me think of my trip to the Louvre to see the Mona Lisa. To get to the room with Da Vinci’s masterpiece, you must walk through long hallways of religious paintings that depict, over and over, the Christian martyrs, the Crusades, and scenes of religious violence reminiscent more of Sam Peckinpah than St. Francis. There were at least 2 Sebastians, pierced by dozens of arrows, bleeding on the stake.  There were 3 heads of John the Baptist brought to Salome. Countless crucifixions. Nothing but destruction, over and over. Visitors weren’t lingering. They were on their way to the Mona Lisa. The ropes begin well down the hallway from her painting, to order the crowd into a manageable queue.

I had expected to be underwhelmed, but that’s not what happened. Mona Lisa’s room was packed. We were all struck, in awe of how she followed us wth her eyes, the way her smile seemed to change as we moved. It was a magical moment, unicorn-worthy and lovely.

Steve Earle, one of my great songwriting heroes, wrote a song called “The Kind,” which is on his CD Jerusalem, dedicated to themes inspired by 9/11, the War on Terror, and the build-up to the Iraq War.  In this song he sings of a soldier who “wins the prize and gets the girl,” of a “cowboy with an achin’ heart,” and finally, of a “girl with a secret smile.”

In spite of all the art devoted to destruction and terror, we were all there just to see the painting of this girl who smiles.  In that moment, as in the story of the unicorn, truth.

“The truth and unicorns, part 3” is in preparation and will round out the unicorn series for now.  After the credits I include all 7 unicorn tapestries, in order.

Photos of The Hunt: http://www.geocities.com/area51/corridor/5177/hunt.html.  I cannot figure out who is responsible for the site, but it lists an email address, amulet@geocities.com.  These photos are a bit darker than the tapestries; the photos on the Met’s Unicorn Tapestries site are much clearer and show the the color much better (but they cannot be dowloaded and are protected by copyright).  Here are the photos, in order.

The start of the hunt 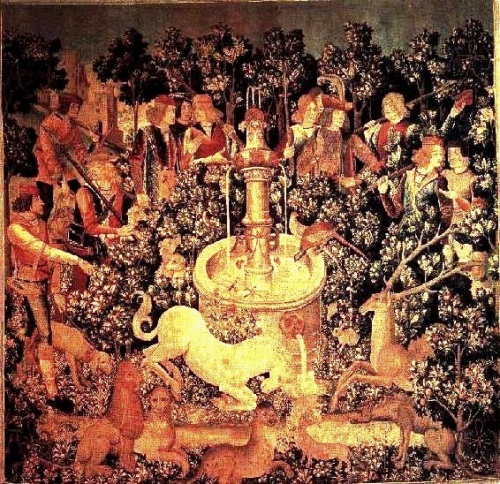 The unicorn is found 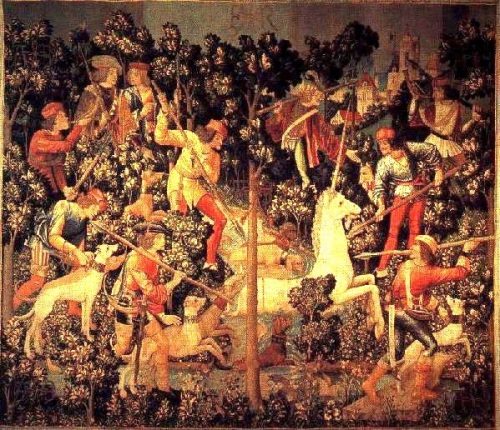 The unicorn at bay 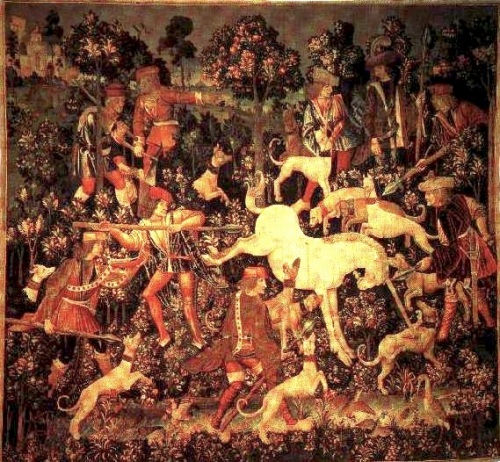 The unicorn leaps from the stream

The Maiden captures the unicorn

The unicorn is killed and brought to the castle

The unicorn in captivity

3 responses to “The truth and unicorns, part 2”